As my P2P investment journey continues, I’m always on the lookout for other opportunities in the market where I can invest and share my experiences.   You may know back at the start of my journey I wrote a blog on who offers P2PLending investments.  Since that time I’ve found a number of other platforms and thought it was worth an update.  While I’m sure this is not an exhaustive list, it does highlight there are many platforms out there to invest into in Australia.  The list below are platforms I’ve come across while researching the field and looking for new opportunities to invest.

What I have also found in this time is that peer to peer lending takes many forms.  While I was initially looking at loans either personal or business, there are whole other categories around peer to peer lending in the form of property investment.   These range from funding for large scale development projects to bridging loans for people who buy, renovate and sell, to funding the purchase of commercial property.

It is important to note that every platform has a slightly different structure so be sure to carefully read through the Product Disclosure Statements and understand what you’re investing in.  In my next blog I will endeavour to break down the platforms available to retail investors.

While I will continue to update this list periodically, if you do find a platform not listed above please comment below or send us an email.

Growth of Peer to Peer Lending in Australia 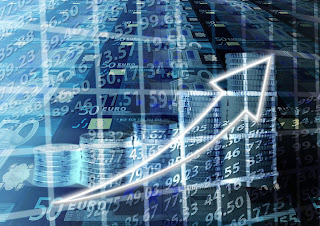 Peer to Peer lending in Australia has been around since 2012 with SocietyOne claiming to be the first P2P platform to start trading in Australia.  While they may have been the first, P2P lending didn’t become available to the retail investor until 2014 with RateSetter becoming the first platform available to everyday Australians.  Since that time the industry has been growing to capture more of market share.

I was interested in the stats and growth of the industry so I started doing some research to learn how large the P2P Lending has become in Australia.  Surprising the last government report I can find on the topic (and all articles I’ve read still reference this) is the ASIC Survey of marketplace lending providers: 2016–17.  This report does indicate that future updates are to follow so I will be sure to keep an eye out.  In the interim, I’ve collated available loans stats from P2P lenders who display their data to give an indication of the growth of the industry.

Before we get to the analysis, there were some interesting insights from the ASIC report on the Australian P2P Lending industry worth highlighting.  The most commonly quoted stat is the size and growth of lending growing from $156 million in Financial Year (FY) 2015-16 to $300 million in FY 2016-17.  To put these figures into perspective, I’ve pulled some Lending Finance stats from the Australian Bureau of Statistics for the corresponding years and tabulated below (all figures in millions).

As can be seen the P2P market is still quite small when compared total debt of Australian consumers and businesses.

The other interesting statistic in the ASIC report was the number of P2P retail investors.  The results were surprisingly with numbers much lower than I would have guessed.  The graph below is an extract out of the ASIC report showing the breakdown of investors. 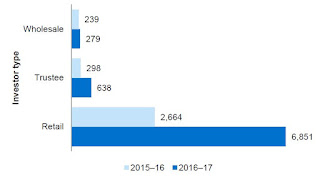 Now we get into the challenge of trying to determine how the industry has grown.  To approach this I’ve collected the available data on loan books from the P2P platforms websites and collated into comparative years.  The data used below was sourced from MoneySpot (through all available individual monthly reports), RateSetter (download of loan book) and TruePillars (entering details of all loans visible on the website – missing about 20 loans based on the numbering convention).  The graph below shows the growth in total loans issued over time.  As can be seen RateSetter has had some significant growth over the past 18 months compared against the other platforms. 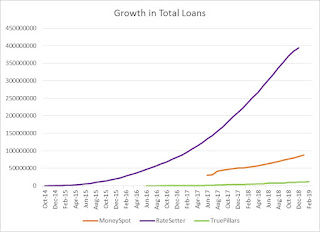 From here the loans funded were split out into individual Financial Years to match the ASIC report.  This gives us an indication of the potential portion of the market at the time of the ASIC report and how it has grown.  The graph below shows the cumulative loans issue per year for the three P2P platforms above. 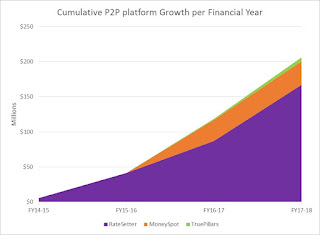 I’ve broken the above down into the table below to show that that the industry is growing year on year at the moment.  The table below is in millions of dollars.

Given the different growth rates of the P2P platforms it’s hard for me to make a projection on the potential size of the market to date so we will just have to wait for ASIC to come out with the details.  However it appears evident the industry has experienced significant growth since the previous ASIC report.  What will be interesting is what impact the Banking royal commission will have on the P2P lending space and if it will help drive the P2P industry by driving people away from the traditional banks to alternative financing arrangements.
at March 14, 2019 No comments:

Funding (https://www.funding.com.au/) is the fifth Peer to Peer platform I’ve now signed up for and am actively investing through.  Fundi...

Pete2Peer
Join me on my journey into Peer to Peer Lending investment as I aim to share my learnings and experiences that I’ve found helpful and hope that it is of benefit to others.